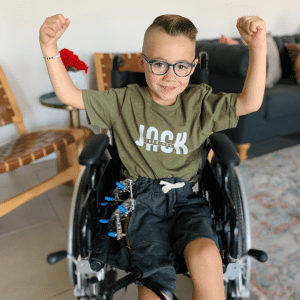 “WHEN THE WORLD IS TRYING TO DIVIDE EVERYONE AND BREAK THINGS APART, SOMETHING LIKE THIS HAS DONE SO MUCH TO BRING AMAZING PEOPLE TOGETHER. WE ARE SO BLESSED.”

“Last July we took a family trip to Newport Beach and by the end of the trip, Jack had started limping. There hadn’t been any obvious trauma so I brushed it off as growing pains or being overly tired from a busy vacation… The limp wasn’t going away for weeks on end so we took him to his pediatrician who was concerned and sent us to get an X-ray. The X-ray found that Jack had Perthes Disease – a super rare bone disease where the top of the femur bone sporadically loses blood supply and the “ball” disintegrates. We were sent to get an MRI and see a specialist. The MRI found that Jack had bilateral Perthes (both hips affected)… The specialist recommended we put him in a wheelchair for 2 years and immediately pull him from all impact sports. This broke my mama heart.

Perthes is a tricky disease. There hasn’t been much research or movement for 50+ years. There’s no status quo treatment plan- it’s very individualized on a case-by-case basis. Our doctor assured us that with adequate rest, and use of the wheelchair, we’d see improvement. Fast forward 6 months and several specialists later, Jack had a follow-up X-Ray. This x-ray showed an alarming rate of degradation in his hip. The top of his femur was completely fragmented, with no living tissue left. His hip, filled with fluid, and his femur, were starting to bow out. The specialist we were seeing gave us several horrific treatment plans (shave off part of his femur to give him a permanent limp, break both femurs to put him in an A-frame cast for months, etc)- none of which he was confident would fix the problem (McCall).” 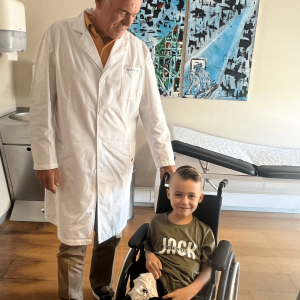 With some miraculous help in the search for the right specialist (Dr. Nuno, an Orthopedic Surgeon specializing in Perthes Disease) and a lot of support, the Tycksen family embarked on a journey to Portugal. In a whirlwind of passport applications, frantic airport trips, missed flights & a journey around the world, Jack underwent surgery that has allowed him the best chances for success on his road to recovery.

We checked in with the Tycksen Fam & got a few words of wisdom from THE Iron Man, Jack, himself:) Read below to find out how recovery is going!

McCall, what went through your mind as you were taking off in that airplane for Portugal?

I put on my brave face for Jack, but inside I was terrified! It’s a scary thing, flying overseas for such a big procedure. Although Jack isn’t my youngest child, he’s still my baby, and my mama’s heart wanted to take every bit of pain away from him. I wished so badly that I could be in his shoes to go through this surgery and endure this obstacle in his place. It’s clear that Jack is a fighter. He’s strong-willed and is being shaped for the road ahead. I know this experience will only make him stronger, but it was definitely nerve-wracking when we were on that plane and there was no turning back! However, through all of this, we truly felt an army behind us, sending prayers and love, which gave us all strength.

As a mama bear, we know this has felt like a blur of emotions and at the same time a long, sometimes painfully challenging road to endure. What is one thing you want to say to others going through similar circumstances, facing injury or trauma, and/or as a mother?

It’s so hard, but let others help you! Once we found our doctor and decided which path we’d take for Jack to heal there was this whirlwind… the moment people found out about Jack’s journey they immediately wanted to help. My first instinct was, “No way! Absolutely not!” That was my pride speaking, of course! Out of fear, stress, embarrassment, and knowing that many others bear heavy loads alone, I finally succumbed. I decided to let the love in and accept the help people offered – a hug, a prayer, well wishes, bake sales, lemonade stands… and many HIGH fitness fundraising classes! We are in awe of the goodness and generosity we’ve felt on behalf of Jack. I’ve learned through all this that people are GOOD and we are meant to lift each other through the hard times. It’s incredibly humbling to be the recipient of this kind of generosity, love, and support (McCall).

Josh, Jack’s story is brightly lighting a path for others. How has seeing your son’s enduring strength and resilience affected you? 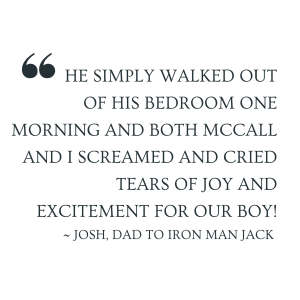 It’s been a challenge to keep his spirit optimistic. We’ve seen it affect his self-confidence, even at 6 years old! Before we discovered Perthes his hip, he’d literally run everywhere he needed to go (even to the bathroom), and would jump or climb every chance he got. Now he’s in a wheelchair at school, which means his school experience looks much different than it has before. At home (and out and about) we have to get creative with the activities Jack can be involved in.

For about 10 days after Jack’s surgery, he was terrified to put any pressure on his leg with the fixator. But slowly he started to make progress. He’d scoot on his bum, then stand with all his weight on the opposite leg (non-Perthes leg), walk slowly with crutches, then finally one day, after seeing a video of a young boy with a fixator, on his feet and running around, Jack became motivated to walk. He simply walked out of his bedroom one morning and both McCall and I screamed and cried tears of joy and excitement for our boy!

This has been and will be a slow process, but it’s working. The human body is amazing and has the power to heal itself — especially in little kids’ bodies that are just so resilient! I’m certain in the long run, this whole experience will be a blink and Jack will be functioning just fine, but even stronger having gone through this (Josh).

Jack, we are sooo proud of YOU! A wise man once said, “Sometimes you’ve gotta run before you can walk (IronMan).” And, YOU have certainly run the hardest of races! What is your biggest goal now? And, what is the superpower you are using to get you there?

“I’m excited to be able to play basketball! Right now I can practice shooting hoops, but I want to play on a team someday soon (Iron Man Jack).”

McCall, where does the road to recovery take you all next? How can we support you all the rest of this journey?

Jack will have the fixator on for about 6 months, depending on how quickly his hip rebuilds. The fixator opens up the space between the pelvis and femur bone, restoring blood flow and allowing the bone to rebuild and regain mobility. Jack is also taking supplements to strengthen his bones and optimize his body’s recovery. Our doctor in Portugal asked us to send him periodic x-rays and once he sees an x-ray that looks right to him, he’ll recommend we get an MRI so he can see it better. Once it all looks right, he’ll have us head back to Portugal to get the device removed. Once we’re back home, Jack will very likely need physical therapy to ensure his hips get back to working as they should.

Really, it’s just the love and support that is all we need; the same well-wishes and prayers, reaching out to let us know you’re cheering for Jack and just that you’re even just thinking of Jackerz goes such a long way. It’s like being told that you’re loved so much by so many people that it’s impossible for his confidence not to be boosted… It makes him feel so special and loved. As his parents, it’s been hard… but also kind of awesome. When the world is trying to divide everyone and break things apart, something like this has done so much to bring amazing people together. We are so blessed (McCall)!

We are truly honored that we were able to share your awe-inspiring story, Tycksen Family!

From all of us at FitnessFest,

“YOU’RE LIFE IS YOUR MESSAGE TO THE WORLD. MAKE SURE IT’S INSPIRING.”